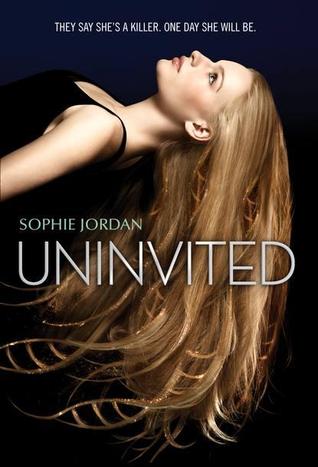 Source: Received from HarperTeen for review.

Synopsis: The Scarlet Letter meets Minority Report in bestselling author Sophie Jordan’s chilling new novel about a teenage girl who is ostracized when her genetic test proves she’s destined to become a murderer.

When Davy Hamilton’s tests come back positive for Homicidal Tendency Syndrome (HTS)-aka the kill gene-she loses everything. Her boyfriend ditches her, her parents are scared of her, and she can forget about her bright future at Juilliard. Davy doesn’t feel any different, but genes don’t lie. One day she will kill someone.

Only Sean, a fellow HTS carrier, can relate to her new life. Davy wants to trust him; maybe he’s not as dangerous as he seems. Or maybe Davy is just as deadly.

After I finished reading this book last night, I was exhausted and wrung out from the emotional intensity in the book (I don’t know why but I just started all-out sobbing under the covers after reading about how terribly people with HTS were treated). You can probably imagine my surprise when I logged on to Goodreads and discovered that Sophie Jordan was also the author of ‘Firelight‘, a book I didn’t particularly care for. I’m glad I hadn’t known that fact before I started reading this; otherwise, I might never have gotten up the nerve to start it. I also can’t believe I never noticed the DNA-like hair the cover model has. I must have been really out of it yesterday…

Things took off pretty quickly from the start, just the way I like it. There was never a dull moment in this book and it had me reading on until the very end, despite the fact I could have zonked out at any moment. All the characters in the story were intriguing, especially the ones with HTS. There were two non-HTS carrier people who also interested me: Zach and Tori (ex-BFF). Zach was Davy’s ex-boyfriend, and I knew from the beginning that he was an idiot, not from my astounding intuition, but from the synopsis. So color me surprised when he pushes Davy up against a car and tells her that he loves her. My reaction was literally umm…okay. Even after the two broke up, Sophie focused on how Zach wasn’t eager to throw Davy to the gallows even after he learned that Sophie has HTS, even after she slaps him for his misconduct (gawd I sound like a teacher). Is there a point to forcing us to remember Zach? Is he going to show up in the next novel maybe? I’d like to see some jealousy between him and Sean *rubs hands together diabolically*. And Tori…she just has problems. I’d love to take a peek into that jealous, little mind of hers.

Sean, he was one of those Edward-cases. Of course, Edward (from ‘Twilight‘) was hotter, but whatever. Sean was all “don’t trust me” and “I’m not good for you”, even though he was the only one who actually cared for and helped Davy every time she needed it (actions speak louder than words!). Eventually, he just told Davy that he couldn’t stay away from her, and they kissed all their troubles away. I may be over-exaggerating a bit, but doesn’t he remind you of the well-known vampire? That’s what I thought. I can’t say that Sean is my most favorite book boyfriend, but he was just perfect for Davy. You’d think Davy is too pure and innocent to be with a guy like Sean (actually, that’s normal in Paranormal Romances), but she has this hidden dark streak in her that freaked me out every time she accidentally let it loose.

The plot was very engaging and it seemed to be a bit of a combination between ‘The 5th Wave‘ (see review here) and ‘The Naturals‘. However, I enjoyed this novel more than ‘The 5th Wave‘ and less than ‘The Naturals‘. The first half of the novel is my favorite for some reason, and it’s also the more normal part, since there aren’t detention camps or anything. The second half was creepy. It had me thinking about fleeing the US if anything even resembling this came to be. I even felt betrayed by the president for a moment. Everything that takes place in this book is completely realistic, and even though I’m not sure about this, I have a suspicion that HTS is not real, but a phony DNA test that allows the government to control specific people they want to a) destroy, or b) use for their own gain. The place Davy is sent to later in the book…it makes me think think the gov. wants her to do something evil. I can’t prove any of this though, so I’ll have to wait until the next book to find out. I’m not sure the next novel will live up to this one, but there are tons of possibilities!