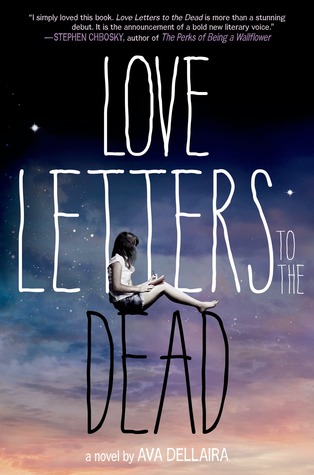 Love Letters to the Dead

Source: Received from Farrar, Straus and Giroux (BYR) for review.

Synopsis: It begins as an assignment for English class: Write a letter to a dead person. Laurel chooses Kurt Cobain because her sister, May, loved him. And he died young, just like May did. Soon, Laurel has a notebook full of letters to people like Janis Joplin, Amy Winehouse, Amelia Earhart, Heath Ledger, and more; though she never gives a single one of them to her teacher. She writes about starting high school, navigating new friendships, falling in love for the first time, learning to live with her splintering family. And, finally, about the abuse she suffered while May was supposed to be looking out for her. Only then, once Laurel has written down the truth about what happened to herself, can she truly begin to accept what happened to May. And only when Laurel has begun to see her sister as the person she was; lovely and amazing and deeply flawed; can she begin to discover her own path.

This book was f***ing amazing! I apologize for the language (sorry!) by I won’t take it back because it’s absolutely, 100% true. If any of you actually keep up with my twitter, you’ll know I said this before, but after reading his novel my mind was literally blown. Literally. There was so much depth to this novel it was amazing. Those of you obsessed with TFIOS, come off it! That doesn’t even hold a candle to this! Alright, fine, maybe it holds one candle, but no way does it hold two! Believe it or not, this book should really be made into a movie. I don’t think I’ll be watching the TFIOS one but this??! I’d be first in line.

At the beginning, I knew this book would keep me reading. I just connected with this book as soon as I saw it on Netgalley. I don’t mean connected connected, because my life is perfect compared to Laurel’s, but man! Okay, I think I better start making sense now.

When I first began reading, I felt a bit ripped off. Laurel is a freshman in high school, but she writes like a middle-schooler. Not only that, but she was incredibly stupid (keep in mind, these were my first thoughts). Yes May died, and even without reading countless other books I know that it’s a very traumatic thing. It’s a form of grief that never goes away, but you have to learn to live with it, and boy that’s not easy, but come on, you’d expect Laurel to have some form of common sense. It’s understandable now after I’ve read the book, but she honestly seemed crazy. She was determined to be exactly like her sister. To live exactly as she did, and to even wear her clothes. Kind of creepy. I knew it was a bad idea from the start. As the letters go on though, we learn more about Laurel and why she is the way she is. It’s this part that’s saddest. It’s not even that Laurel totally shut down once her sister died. No. It’s that she put her trust in the wrong person, in a person who couldn’t even take care of herself.

So while I couldn’t stay mad at Laurel, her mother and her sister May were a whole ‘nother story. The mother, or should I say the ditcher, is someone I reeeeally didn’t like. She represented everything I hate in the mothers of today. The mid-life crisis thing, it gets old. People like that don’t deserve to be called mothers. What they do, it’s basically equivalent to pretending you don’t have kids and a husband just because you’re too worried about yourself to care about how you’re hurting them. Can you say selfish?! Some mothers come back. Some don’t. Does it make a difference? Yes. Is it possible to pretend it never happened? No.

What was so interesting about this book, so addicting, was that no one, NO ONE in this book was perfect. You’re probably thinking that that’s true in every book, and even in life, but when I say no one was perfect, I mean everyone either had family problems, drug problems, or lesbian problems. It was kind of scary, and it definitely made me thank God for the life I have the privilege of living, though I may not always realize it. When it comes to these “problem children”, I’ve come to realize that I never look beneath the surface. For example, if someone smoked pot – in a book or in real life, I wouldn’t even bother with them except to immediately dislike them. But Laurel’s letters forced me to get to know everyone; they forced me to look beneath the drug habits and the bad temper and the crazy flirting. I even took a peek beneath the homosexuality. And what I found underneath was so sad and painful that I couldn’t even read the words on the pages through the tears in my eyes.

So yes, this book these letters were real and beautiful and alluring and heart-wrenching, but above it all, more than anything else, they show us the honest to goodness truth, the parts of life that not all of us witness (thank goodness!), and that, more than any tear or romantic scene or plea for pity, is what makes this book special, and yeah, much better than TFIOS could ever be.

2 thoughts on “Review: Love Letters to the Dead by Ava Dellaira”